Mammograms prevent death from breast cancer.   Right?  Not so fast.  In recent years naysayers have spread the concept that mammograms lead to the over diagnosis of breast cancers that have no clinical relevance and will never threaten a woman’s life.  Dr. Stark has reviewed this issue in the past.  Click here to see his assessment of the work of Dr. Welch from Dartmouth, the naysayer in chief.  Now comes a study from Sweden that sheds considerable light on this subject.  They studied over 500,000 women who were eligible for mammography.  The major drawback of the study was that it was not randomized, i.e., women were not randomly selected for mammography vs. none.  Nonetheless there was almost a 50% reduction in breast-cancer related mortality in women screened.  Click here for the full study. 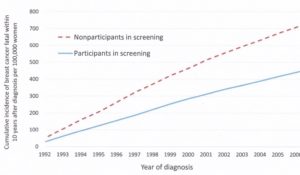 At the moment (May, 2020) the full article can be downloaded for free.  It is likely that this article will be savaged by the same naysayers, but fourteen-year follow up is very powerful in data analysis, since much of the mortality from breast cancer is delayed.   The method that the Swedish doctors used was clever: they looked at mortality from date of diagnosis.  That cuts out all the debate about the meaning of size of the cancer discovered, lead-time bias, and the like.  The study was not randomized, that is, they looked at women who had mammograms versus those who didn’t but made no effort to control for who would get tested.  Given the totality of the world experience, that would after all have been unethical.  So in theory that would be a criticism of the study, but the population of Sweden is relatively homogeneous, so it is unlikely that income level or ethnic or racial make up would have influenced the results.  Tha authors did not attempt a demographic analysis of women screened versus not, nor did they look at age — arguably a bigger drawback to their analysis.

Oncologists who see scores of women with breast cancer have appreciated for decades that the average size of breast tumors in women referred for therapy has been falling, and that fewer and fewer of them are dying of cancer.  Dr. Stark knows of no oncologist who does not recommend mammography for his or her long-term cancer survivors.  This study affirms that recommendation.