Advanced or metastatic colon cancer was for years barely treatable with chemotherapy.  The chemo drug 5-fluorouracil was invented over fifty years ago and still is the backbone of modern chemotherapy.  Several additional drugs have been added, but most remissions are still temporary.  Average survival for patients with metastatic disease has gone from fourteen months to two years with these improvements, but that’s still not much.

A couple of years ago oncologists looked at the possibility that a subset of these patients would benefit from immune checkpoint inhibition.  A class of drugs has been developed over the last fifteen years that convince the body’s immune system to reject these cancers, whereas previously the immune system had been blocked from doing this.  There a type of colon cancer that is associated with a common form of inherited cancer known as Lynch syndrome.  People so afflicted have a high likelihood of getting colon cancer as well as uterine and stomach cancer, to name just a couple out of several other cancers.  Such tumors are possessed of a gene mutation known as the mis-match repair gene.  When immune checkpoint inhibitors were tested against those tumors from patients with inherited colon cancers remarkable results were seen.  The article showing all of this can be previewed here.  If you want the entire article, send a note to Dr. Stark in the box to the right.  A high percentage of tumors melted away, and some patient seem to be cured — previously unheard of with this disease. As you can see from the picture  on the left, survival was dramatic with most of the patients alive at  two years.  Although   these patients  represent  only  a small subset  of all  patients with  colon cancer,  this  is an  oncologic home  run.  Dr.  Stark weighs  in:  this treatment  is a paradigm  shift  in the  treatment of  colon cancer.  There is  more to  come! 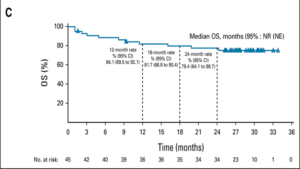