Radiation for Prostate Cancer — When is best?

Oncologists have known for years that at the first sign of recurrence there is value in giving radiation to men who have had their prostates removed for cancer.  The next question some have asked is: if radiation after recurrence is good, could radiation before recurrence be better?  Before we try to answer the question let us set the stage.  After removal of the prostate, doctors will follow the patient with serial PSA blood tests.  The PSA — Prostate Specific Antigen — is typically elevated in prostate cancer and falls to zero after the prostate is removed.  If it goes back up the disease has probably recurred.  When the PSA is slightly elevated most scans and x-rays will still be normal, but many recurrences will start out where the prostate used to be.  So it makes sense to consider giving radiation at the first sign of PSA elevation.  In the Journal of Clinical Oncology, doctors from the US and Germany looked at this question.  The senior author, Dr. D’Amico, is from Brigham and Women’s Hospital and Dana Farber Cancer Institute at Harvard Medical School.  They looked at thousands of men with prostate cancer with adverse risk factors, including bad-looking cancer cells (high Gleason score) and or positive lymph nodes.  At the end of eight years, men who received immediate radiation did much better than those whose radiation was delayed until first sign of recurrence.    That difference was seen, however, only in men at highest risk of recurrence.  See graph below for actual results.  The “all cause mortality” is lowest for the dotted green line — men who received immediate post-operative radiation. 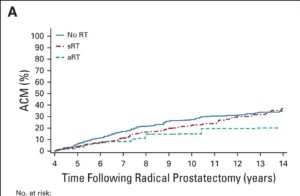 So what does this mean?  Dr. Stark comments, “This study sets the new standard of care for men with high-risk localized prostate cancer.  The nearly halving of mortality in the highest risk group is stunning.”